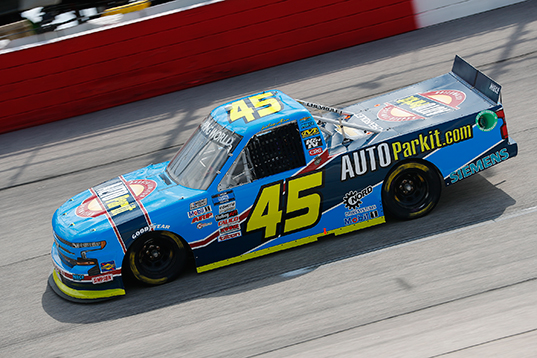 Alan will drive the No. 45 Chevrolet for Niece Motorsports, vying for the NASCAR Camping World Truck Series Championship in addition to Rookie of the Year Honors.

“I am very excited to have the opportunity to run for a championship with Niece Motorsports next year,” said Alan.  “Niece Motorsports is an organization that regularly contends for wins, and I am looking forward to contributing to their winning tradition.  I am very thankful to have the opportunity to work with Niece and I’m really looking forward to driving the No. 45, AUTOParkit™ 2022 Chevrolet Silverado RST.”

The California native has made eight NASCAR Camping World Truck Series starts so far this season, with his best finish of 18th coming at Bristol Motor Speedway in September.  Alan will make his ninth start of the year on Friday at Phoenix Raceway.

“This is another huge piece of the puzzle to fall into place for our organization next season,” said Niece Motorsports General Manager Cody Efaw.  “Lawless brings a lot to the table.  He’s raced in a lot of different disciplines, and I think that will really pay huge dividends for him next year.  Our team is already working hard to prepare for next season.  We’ve got a ton of young talent on our roster next year with Lawless, Dean [Thompson] and Carson [Hocevar].  We’re looking forward to it and ready for the challenge.”

Alan won the 2018 Track Championship at Irwindale Speedway in the NASCAR WHELEN Late Model Series.  In 2019 Lawless won Rookie of the Year honors in Trans Am’s TA2 Series and most recently won the 2020 Silver State Road Course Winter Series at Las Vegas Motor Speedway.  Alan has also won the Late Model Winter Showdown at Kern County Raceway, where he qualified on the pole and set a new track record in the process.

“Lawless continues to impress us on the track and off,” said AUTOParkit Vice President of Sales Shawn Adams.  “His participation in NASCAR’s Camping World Truck Series has brought tremendous value to our brand.  For 2022 we are thrilled to have him on a winning team and have him driving some of the best equipment in the Series.  We’ve made a long-term commitment to Lawless, and we are looking forward to working with Niece Motorsports as we build our brand through involvement with NASCAR in 2022 and beyond.”

Niece Motorsports is owned by United States Marine Corps Veteran Al Niece.  In 2021, Niece Motorsports enters its sixth season in the NASCAR Camping World Truck Series.  Niece also owns Niece Equipment, which has for over 40 years provided clients with reliable products at competitive prices.  Niece Equipment’s reputation is built on service, integrity and dependability. The company provides water and fuel/lube trucks that are engineered with quality and durability in mind for the construction and mining industry.  Follow the team on Facebook and Instagram @NieceMotorsports as well as Twitter @NieceMotorsport.

AUTOChargit designs, manufactures and installs EV charging systems for automated and conventional parking applications. AUTOChargit can decrease capital expenditures by up to 75 percent by providing automated coupling and decoupling of EV charging stalls from the power source. For conventional parking applications, a single 40-AMP circuit coupled with a single AUTOChargit System can be multiplexed to four, eight, or 12 stalls. Each charging stall is individually metered for the exact tracking of electricity usage. The AUTOParkit Mobile APP provides a touchless experience for the user.