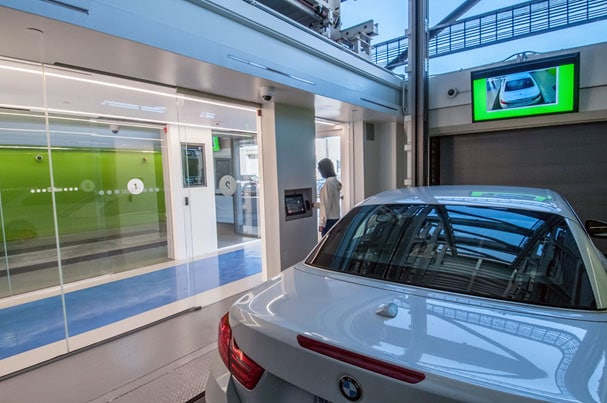 AUTOParkit™ System Reduces Excavation by Half

Marina Del Ray, CA July 6, 2017 – Dasher Lawless Automation broke ground last month on a subterranean, 277 stall AUTOParkIt™ System. It is the largest fully automated parking structure below grade in the U.S. It is longer than a football field and features multiple load bays to service both tenants and guests. This Auto Parkit System will rotate vehicles 180° to allow drivers the convenience of driving directly out of the structure when exiting without ever having to reverse. The system also features automated electric vehicle charging stalls and automated bicycle storage.

Going below ground with a traditional approach would have required a depth of over 40 feet and with the high-water table it would have render the project unbuildable in its current form. The AUTOParkit System required only 16 feet and less than half required by the traditional approach. “The water table notwithstanding, reducing the depth had the project saving over a million dollars”, summarized Christopher Alan. “An AUTOParkit System below grade is actually less expensive than a comparable traditional concrete structure which really opens up opportunities for developers that face similar issues. Additionally, locating the fully automated parking structure below grade allows the development to maximize the grade level for rentable space.”

Christopher Alan, President of Dasher Lawless Automation and creator of the AUTOParkit™ System, said, “AUTOParkit is a modular, scalable system. It can be designed for above grade, below grade or both. The project with Creative Office incorporates a variety of equipment to increase through-put to meet the project’s peak hour demand. A key advantage of the AUTOParkit architecture is it’s building block approach and off-the-shelf technology. While the underlying API System adapts to the individual site, the user experience remains consistent. The driver pulls into a single stall load bay (garage) exits their vehicle and completes a short questionnaire then leaves. The API System then automatically parks the car. When the driver requests their vehicle from the system it is returned back to an available load bay. Simple.”

The project schedule calls for the AUTOParkit System, once completed, to be used for material storage for the duration of construction of the project. Christopher Alan, a seasoned developer, explains, “Most sites have their challenges with material delivery, staging, damage, and theft. The AUTOParkit System is built to automatically store vehicles however the system does not distinguish between a 6,000-pound vehicle and 500 2x4s or 40 toilets or stacks of conduit. If the material fits inside the ‘vehicle envelope’ we can place it onto a pallet and store it in the rack structure where it is secure. The material can then be requested to be delivered to the load bay when it is needed. This allows the project manager to know which subcontractor has requested what material to improve material tracking.”